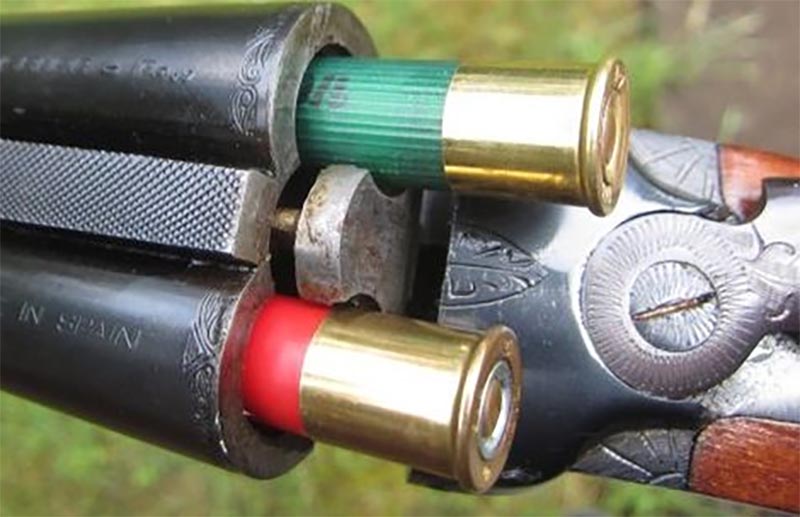 Inadequate for self-defense, .410 slugs’ primary use is for hunting, so what are the largest animals and the longest ranges they can be used for?

Having already discussed that any load of .410 is a suboptimal choice for defending against humans, it raises the question of what exactly this cartridge is good for. The answer is obviously hunting, but because .410 slugs are the most effective load type for this purpose the next logical question is what’s the largest sized animal that could be effectively hunted with a .410 slug? Let’s take look at their ballistic properties to find out. 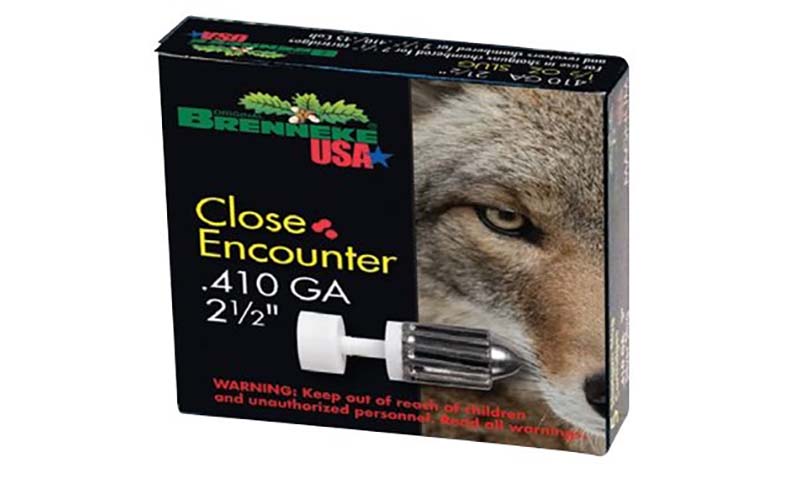 If you’re considering hunting with a .410, before looking at its ballistic efficacy its important to check one’s local laws and regulations. Depending on where you are, .410 bore shotguns may or may not be legal to hunt with. Assuming that they are legal for you to use, what’s the biggest animal one could reasonably expect to hunt with a .410 slug? Part of this question pertains to how humanely the kill can be achieved as well, as one would not want to use ammunition that would only wound an animal and give it the chance to flee and succumb to its wounds later on. Good hunters know that both for the sake of efficiency and out of respect for the animal, one should always aim to harvest their game as swiftly as possible. The smaller the projectile used and the less energy it imparts on the target elevate the importance of shot placement. While a 12-gauge has enough energy to drop most deer even with an imperfect shot, .410 requires greater care to achieve the same result. 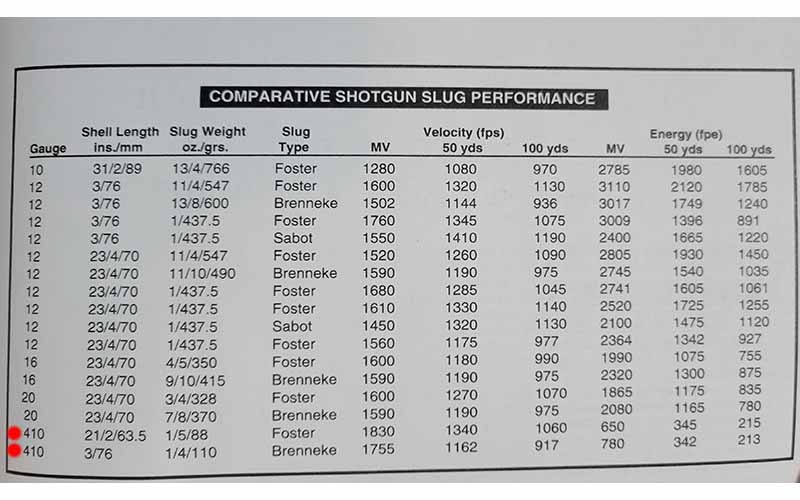 As this chart from Frank Barnes’ Cartridges Of The World shows, while .410 slugs exit the muzzle with velocities higher than most 12 or 20-gauge slugs, they lose that velocity at a faster rate than the larger mass projectiles do. The .410 slugs also deliver less foot-pounds of energy on target even at the muzzle, and again with a greater rate of loss as the range increases. What this data translates to is that while .410 slugs may provide sufficient energy within 50 yards, beyond that its efficacy begins to drop dramatically. In fact, according to some ballistician’s recommendation of a minimum 1,000 foot-pounds of energy to ethically kill a deer, the .410 is inadequate even at the muzzle. This doesn’t mean that ethical kills can’t be achieved with .410, even beyond 100 yards, but it does mean that one’s shot placement becomes massively more important in order to achieve it.

Not all slugs are created equal, and when it comes to .410 that seems to be doubly true. The two primary slug types one will find for a .410 (or any shotgun) are Foster and Brenneke. You can see on the previous chart that both kinds were tested, and the results show similar performance between the two save for the Foster’s slightly higher velocity and energy at most distances. This may lead you to believe that Fosters are the superior .410 slug, but results on soft targets paint a different story.

The main difference between the two kinds is that Brenneke slugs’ wads stay attached to the projectile throughout the slug’s travel. Where Foster slugs use their hollow base to create negative air pressure to stabilize themselves, Brenneke slugs use their wad to do so. It would take a better understanding of physics than I possess to explain exactly why this is the case, but the result of the slugs’ differences makes the Brenneke far more effective on target.

Perhaps due to the Foster slug’s higher velocity, the construction of the projectile or some combination of these two factors, Foster slugs typically disintegrate upon impact and provide very little penetration. While this may be adequate on smaller game, the importance of proper penetration depth on something like a deer is far more vital. To have the best chances of dropping a larger animal with a .410 slug, always choose a Brenneke over a Foster.

Should You Hunt Deer With .410 Slugs?

Firstly, a deer is probably the largest animal one should consider using a .410 to hunt with. Anything larger and the requirements for precise shot placement would become prohibitively difficult. People often recommend that the maximum range one should attempt to use a .410 slug to take a deer is 100 yards, but some even say only 40 or 50. It all boils down to shot placement. There are shooters out there with the skill to make a 100+ yard shot on a deer with a .410 and drop it, but it raises the question of why one would want to. If you’re seeking to challenge your marksmanship skills, it seems that it would be more ethical to practice that on a target that would not suffer as a result of your mistakes. If you insist on testing your marksmanship while hunting, however, a rifle will provide a more consistently accurate projectile that can reach out further than a shotgun slug ever could.

The lighter weight of .410 shotguns and their ammo combined with the cartridge’s lower recoil impulse make them appealing to the small-statured, the disabled and parents searching for their child’s first gun. If one of the traits of .410 appeals to you and you want to use one for deer hunting, there’s nothing wrong with that, but as Dirty Harry said, “a man’s gotta know his limitations.” In this case, one must know their own limitations of marksmanship as well as the limitations of their weapon. While on a hunt with a .410, spotting a deer should make you ask yourself “is it close enough for .410 to effectively drop it?”, and “is it close enough for me to reliably hit its vital organs?” If you have any doubt about either answer, you should probably think about trying to get closer. These are all considerations that are less important with 20 or 12-gauge, so unless one of the .410’s traits specifically benefit you, you’re likely better off sticking to one of the larger gauges.

So, do .410 slugs serve a purpose? They are absolutely viable for hunting, but the larger the animal and the greater the distance the less effective they become. For those considering using .410 slugs for deer, you should really have a valid excuse as to why you’re using that over 20-gauge at the least, and you must remain very cognizant of both your and your weapon’s limitations. For the average shooter, this probably means sticking within 50 yards for a deer-sized animal and placing extra care on one’s shot placement. While plenty of deer have been bagged using .410 in the past, in 2021 it only offers some niche advantages that most individuals would not benefit from. While .410 has gained some popularity with hunters in recent years, most people would still be better off with a 12 or 20-gauge.