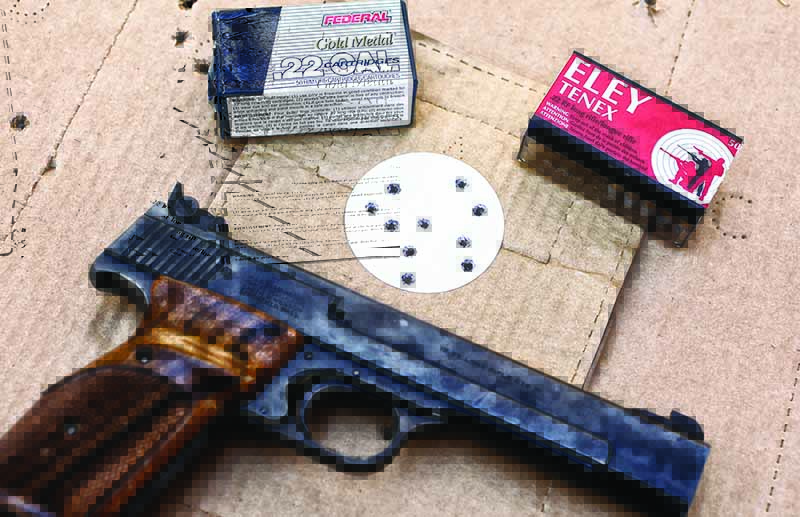 Conditioning a rimfire barrel? Pish if your aim is perforating tin cans. But if maximum accuracy is your goal you’d better listen up.

What You Need To Know About Conditioning a Rimfire Barrel:

By 1986, I had been on a roll for a few years. I attended three U.S. IPSC Nationals and had a slot for a fourth. I shot in local matches in two states and the Second Chance Combat Match. I suddenly had an invitation to the inaugural Masters in my mailbox. Woo-hoo!

But I needed a rimfire pistol.

As luck would have it, I had just acquired an S&W M-41. I proceeded to the gun club with my also-new Ransom rest and proceeded to make myself crazy. Nothing would shoot well enough for the match, and nothing shot as well as the pistol or the ammo makers promised. Even the good stuff printed groups on the lines of 3 inches at 50 yards.

I was about to give up when I remembered reading about small-bore rifle competitors. They’d test various batches of ammo for accuracy, and when they found the best available for their rifle (this was in the early Paleolithic era for ammunition accuracy), they’d buy a metric truckload of it.

And not just that load but that production lot.

The important thing was this: They had learned the necessity to “condition” a rimfire barrel for each ammo tested. That is, they’d either run a patch down the bore and then shoot the next load (rare in small-bore circles) or just start shooting the next load. But they wouldn’t measure groups with the next load until the load had time to deposit its own mixture of lube and residue in the bore—its own mojo, if you will.

That was the step I was missing.

By shooting two, three or four groups with a given load, and then switching to the next, I wasn’t giving my M-41 time to settle down with a particular batch of rimfire and get into the mood. It was always just about set, and then I’d go and change things.

Oh, the impatience of youth.

Why do firearms do this, and in particular, rimfire firearms?

Simple: .22 Long Rifle ammunition is, as we all know, outside-lubed. Unlike centerfire ammunition, where the case encloses the lubricant, on a rimfire, it’s right out there, in front of God and everybody else.

Every maker has their own “secret sauce” of lube—what works, what’s cheap and what stays in place during manufacture, shipment, storage … who knows? They make their own, and if there are still traces (or more than traces) of lube or something else from the previous load tested, the bullet can’t really do its job.

The lubrication issue is exacerbated by the pretty much pure lead composition of the bullet. They’re made soft because it’s cheap, and soft bullets are easier to swage into shape. But they’re also made soft so they’ll upset, or obdurate, in ballisticians parlance, to fit the bore.

This means that, in order to wring the most accuracy out of a given load, you have to shoot enough of it so that the lube-size-bore-fit-travel equation is to the satisfaction of the firearm in question.

What about cleaning the bore? First of all, at that time (I don’t know about now) most small-bore shooters would look at you with a mixture of horror and pity were you to broach the subject of cleaning rods, solvents and patches. Brushes down the bore was simply a taboo subject. The risk of wear to the throat or muzzle of their rifle was too great, in their opinion—better to simply shoot more ammo.

As far as cleaning the rest of the rifle or pistol was concerned, that wasn’t a problem. And if any cleaning solvent or oil found its way into the chamber or down the bore, well, the solution to every problem was to shoot enough rounds to “clean it up” and “recondition” the bore. Back when “expensive” rimfire ammo might cost you a nickel a shot, “shooting more” was inexpensive advice.

As I told you, this was the early Paleolithic as far as bores, lube, cleaning and accuracy were concerned. Today, things may or may not have changed; it depends on what you think “accuracy” is and who you’re shooting with. The last time I was shooting accurate rimfire rifles (scarily accurate, at that) we were connecting on plates out to 400 yards, as long as the wind cooperated. We didn’t change ammunition, however, and we didn’t put anything down the bore but more ammo.

Now, does this matter today? That depends. If you’re out for an afternoon of plinking or teaching a new shooter how things work, no. Minute-of-tin-can is going to be plenty accurate, and using whatever ammo is available, inexpensive or reliable is what’ll get the job done.

However, if you’re trying to improve your skills in the form of using a duplicate rimfire to your centerfire pistol or rifle, then maybe. If the accuracy level of the mismatch ammo to bore is still smaller than your aiming error, you’re in the same boat as the plinker or new shooter—you won’t notice a thing.

However, if you’re shooting in competition or you’re trying to find what an otherwise accurate pistol or rifle will do at its best, then, yes, you have to condition the bore. And recondition with the next load.

What I found was that my M-41 was the equivalent of a redheaded supermodel when it came to rimfire ammunition and accuracy. It’d take me 20 to 30 rounds of the next load before it’d settle down, and then it might or might not like what I was feeding it. I finally found that there was a correlation: The more expensive the ammunition, the better the chances it would deign to shoot it well.

I used the cheap-but-accurate-enough ammo for practice, and then I made sure I reconditioned the rimfire’s barrel thoroughly with the expensive stuff before loading up the car and driving to Quincy, Illinois. I did well enough that, after three years, they bumped me up from amateur to professional. I couldn’t be both a full-time gunsmith and a professional shooter, so I had pick one and bowed out of the pro division.

Oh, and the redhead comparison? I had by then been living in a university town for a number of years. While my sample size wasn’t statistically significant, there were some correlations. And yes, there were levelheaded redheads and crazy brunettes (we won’t speak of blondes at this time), but the odds were, well … with the stereotype.

Editor’s Note: This article originally appeared in the January 2021 issue of Gun Digest the Magazine.