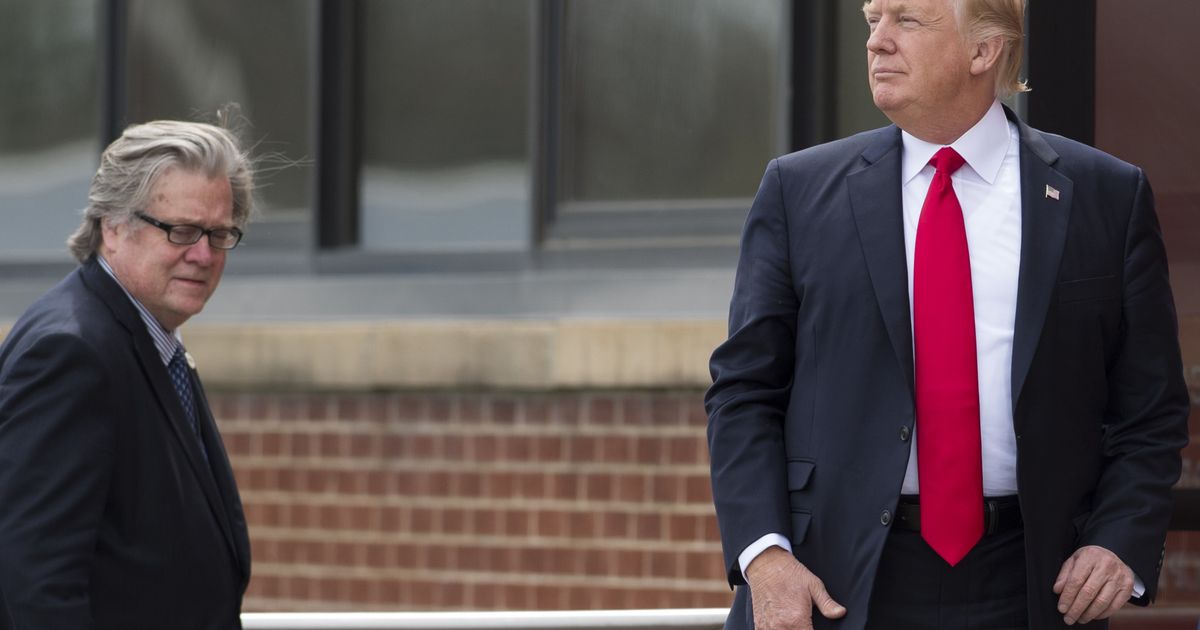 At the very end of his final full day in office, President Trump exercised his clemency power, offering 73 pardons and 73 commutations — more than doubling the number of people he has awarded clemency to since taking office. Then, as Biden’s inauguration got underway, Trump issued one more, pardoning Albert Pirro, Jr., Fox News personality Jeanine Pirro’s ex-husband.

The 11th-hour blitz comes in the wake of an already considerable clemency effort. Last month alone, he pardoned or commuted the sentences of more than four dozen people, a spree the White House reportedly intended to continue in batches before he left office — only to forgo that plan in the wake of the stunning attack that Trump incited at the U.S. Capitol on January 6. Instead, in the final hours of his term, Trump wielded his pardon power in one fell swoop. Below, the list of everyone on his final list, and a look back at the pardons he issued earlier in his term.

With less than an hour left in his presidency, Trump pardoned Albert Pirro Jr., ex-husband of Jeanine Pirro. The influential Republican businessman was convicted of 34 felony counts of tax evasion and conspiracy in 2000.

One of the surprises of the Tuesday night’s marathon of absolution was a full pardon for Trump’s former White House chief strategist Steve Bannon, who exited the administration shortly after the white-nationalist violence in Charlottesville in 2017. Bannon, the former Trump campaign CEO and executive chairman of Breitbart, has mostly been outside of the president’s circle since the publication of Fire & Fury in 2018, in which he was the source for several scathing quotes and anecdotes about the president and his adult children. Bannon is currently awaiting trial on a federal case in which he allegedly defrauded Trump-supporting donors of over $1 million as part of a crowdfunding effort to build a border wall.

According to the New York Times, much of the delay in announcing the pardons was due to a debate between Trump and White House advisers over granting clemency to Bannon, who has not yet stood trial. Bannon also reportedly spoke to Trump over the phone on Tuesday.

Trump has also granted a full pardon to Republican fundraiser — and major Trump campaign backer in 2016 — Elliott Broidy, who pleaded guilty in October 2020 to acting as an unregistered foreign agent in a scheme to accept millions of dollars from Malaysian and Chinese interests to lobby the Trump administration. As the New York Times’ Kenneth Vogel notes, Broidy was also “investigated (but not charged) [for] an alleged scheme to offer a bribe in exchange for clemency for a convicted tax criminal.”

Trump has granted a full pardon to Lil Wayne, who pleaded guilty in December to felony gun possession while on parole. The rapper, known legally as Dwayne Michael Carter Jr., endorsed Trump ahead of the election.

Trump has commuted the sentence of Bill K. Kapri, also known as the rapper Kodak Black. In 2019, he was arrested on a federal weapons charge and sentenced to close to four years in prison.

Kwame Kilpatrick
﻿Trump has commuted the sentence of Kwame Kilpatrick, the former Detroit mayor who was sentenced to close to 30 years in prison on corruption charges.

Paul Erickson
The conservative operative with close ties to the NRA was sentenced to seven years in federal prison last summer on charges of wire fraud and money laundering as part of an effort to defraud investors in an energy scheme in North Dakota. Erickson, who was granted a full pardon, is also the former boyfriend of Russian agent Maria Butina.

Ken Kurson
Trump granted a full pardon to Ken Kurson, a Rudy Giuliani associate who was named as the editor-in-chief of the New York Observer by its owner Jared Kushner in 2013. Kurson was reportedly under consideration for a seat on the board of the National Endowment for the Humanities, but a background check reportedly revealed he had harassed a doctor at Mount Sinai in 2015. Trump granted him clemency for an October 2020 charge of cyberstalking and harassment related to his divorce proceedings.

Rick Renzi
Renzi, a former Republican representative from Arizona, was granted a full pardon following his conviction in 2013 of extortion, bribery, insurance fraud, money laundering, and racketeering in relationship to a land-swap scheme.

Robin Hayes
A former chairman of the North Carolina Republican Party and representative in Congress for a decade, Hayes pleaded guilty to lying to the FBI in a bribery investigation in 2019. He was granted a full pardon.

Duke Cunningham
Trump granted a conditional pardon to Cunningham, a former Republican representative from California who served eight years in prison for accepting at least $2.4 million in bribes from defense contractors while he was in office.

Bill Walters
Trump commuted the sentence of noted sports gambler Bill Walters, who was convicted of insider trading in 2017. The New York Times reported that Walters had hired former Trump lawyer John Dowd after the attorney boasted he could help clients secure pardons.

Robert Zangrillo
A parent involved in the 2019 Varsity Blues investigation, Trump granted a full pardon to Zangrillo, a Miami businessman who was charged with securing his daughter’s admission to the University of Southern California through fraud and bribery.

Notable absences from the last-minute pardons

Among those who did not make the list despite reported considerations in the final weeks of the administration include Trump’s personal attorney Rudy Giuliani, former Speaker of the New York State Assembly Sheldon Silver, and Tiger King star Joe Exotic, who reportedly had a limo on standby:

This stretch limo just arrived at the Fort Worth prison where “Tiger King” Joe Exotic is expected to be released if he receives a presidential pardon. pic.twitter.com/jpeAF4Nlg6

Could Trump still pardon himself?

The late-night grants of clemency are expected to be the last of Trump’s presidency. However, he can legally issue pardons up until noon on Inauguration Day, theoretically leaving open the possibility of Trump attempting to preemptively pardon himself — a practice that remains constitutionally untested, despite Trump’s long insistence that he has the right to do so — as well his children. While the Constitution does not bar a president from granting clemency to family, no Trump has yet been accused of any federal crimes, and it’s unclear whether a president can issue a general pardon to prevent criminal liability for federal offenses. (Presidential pardons do not provide protection against state crimes.) On Saturday, legal advisers reportedly warned Trump not to pardon himself, his children, or any Republican lawmakers — unless he was prepared to cite specific crimes — because it would suggest guilt and potentially put him in legal jeopardy, according to CNN.

Who Has Trump Pardoned Previously?

Throughout his presidency, but particularly since losing the election, Trump has issued several pardons or commutations to political allies and associates, including many ensnared in Robert Mueller’s investigation into Trump campaign contacts with Russia: Michael Flynn and Roger Stone, both of whom were charged with lying to federal officials; Paul Manafort, Trump’s former campaign chairman who was convicted of a variety of financial crimes unearthed by Mueller’s inquiry into the 2016 election; and George Papadopoulos and Alex van der Zwaan, both of whom pleaded guilty to making false statements to federal investigators about campaign contacts with Russia.

Presidents historically issue a wave of pardons or commutations in the waning days of their term, many of which are controversial, such as Bill Clinton’s pardon for fugitive financier Marc Rich, whose ex-wife gave significant donations to the Democratic Party and Clinton’s presidential library — one of 140 pardons granted on his last day in office, the Washington Post notes. However, Trump has shattered norms with his willingness to brazenly use his authority to benefit friends, associates, and allies who could help his political aims. Yet, despite the personal nature of his pardon pen, he apparently began offering pardons to anyone in his vicinity after his election loss, reportedly telling one adviser he was going to pardon “every person who ever talked to me” regardless of whether they asked for one or had committed a crime.

The system for reviewing candidates has also been unusual under Trump: While previous presidents have mostly awarded clemency to those identified and vetted in a review process conducted by the Justice Department, Trump has instead turned to outside advisers for help in deciding who should win clemency. Naturally, well-connected lobbyists have reportedly tried to monetize their access to the outgoing administration by selling pardons, or the prospect of them, to convicted criminals. On Saturday, the Times reported that some Trump associates have raked in tens of thousands of dollars to advocate their clients’ position to the White House.

Daily news about the politics, business, and technology shaping our world.


By submitting your email, you agree to our Terms and Privacy Notice and to receive email correspondence from us.