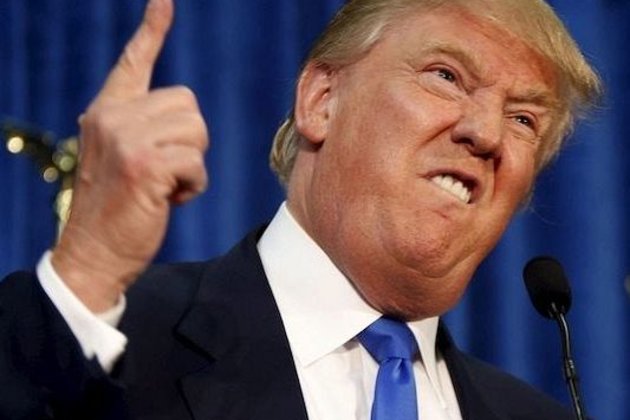 The destruction of democracy in the Capitol on January 6, live-streamed by proud perpetrators, was a gross violation commanded by the U.S.’s Terrorist-in-Chief, Donald Trump.

The murder, pillaging and wanton destruction by an armed civil militia high on a cocktail of politically induced intoxicating drugs including racism, white supremacy, insurrection and thuggee patriotism, were answering a call to arms by a deranged, unhinged and delusional Donald Trump.

Trump has triggered a tectonic shift. His regime has already undermined and compromised U.S. domestic and international security and there is uneasiness at the ease with which insurgents gained access to the Capital taking selfies in Speaker Nancy Pelosi’s office and stealing her laptop.

It smacks of insider collusion and despite the 25,000 National Guards deployed to safeguard tomorrow’s inauguration of Joe Biden, the FBI and other agencies are on alert for green-on-blue terrorists. That phrase should read red-on-blue – red being Trump’s war campaign colours.

Inside the ‘dangerous’ mind of President Donald Trump

U.S. President Donald Trump has exhibited many signs of a dangerous mental condition during his time in the White House.

Now, Independent Australia has learned that the CIA is investigating possible links between foreign actors and the Trump Administration in relation to the Capitol siege.

It is clear that the siege was a military operation and was well planned. On face value, it initially appeared robust but benign and spontaneous.

Intelligence sources and insiders have confirmed that communications traffic to and from overseas is being investigated, along with office and personal, home devices.

We understand that such scrutiny is not going before any courts at this stage. Why? Because, we’re told, certain judges in certain jurisdictions cannot be trusted.

Collusion by police and other agencies must be countenanced, including government and political figures.

It is no secret that racism is rife in the Capitol Police force. Black officers have been filing complaints for years.

His self-serving words at the preceding Save America rally, timed to coincide with the formal certification by Congress of Joe Biden’s election, specifically exhorted cult followers to march and fight.

That speech proved an incendiary explosive device to the madding crowd; he not only turned the flame thrower towards the Capitol, but also supplied the accelerant.

Even before his election, Trump boasted of how he could “stand in the middle of 5th Avenue and shoot somebody and I wouldn’t lose voters”. Tragically, he was probably right. Then.

But why would you associate yourself with such imagery? The Capitol siege will hopefully shift the axis, in the same way that the Black Lives Matter movement has. Under the COVID-19 and inauguration radar has slipped the news that the once-powerful National Rifle Association, that laughingly describes itself as a civil rights body, has filed for bankruptcy in New York after imploding in a scandal of corruption and shonky expenditures. Surprise. Surprise.

Options for Donald Trump after losing the U.S. Presidency include moving to form a continuing extremist political movement based on personality.

TRUMP’S GANG RAPE OF DEMOCRACY AND THE BODY POLITIC

He urged them to wage war on the nation’s body politic and the people’s house, the font of Democracy, custodian of the Constitution and the Law.

The demented messianic republican President Trump, more King Leer than King Lear goaded his mercenaries to rail against due process and legitimate election results that determined the majority of both the popular and electoral college votes favoured democrat Joe Biden as the 46th President of the United States of America.

Trump emerged the bigger loser. And a liar. The riots were treasonous in intent, again ripping out the sutures resewn on the never healing wounds of racial and economic segregation whose waxen once cotton thread leads us to the enslaved ancestors of African Americans.

White supremacy is at the root of the battle to take the Capitol and is the slave to Trump’s venomous, xenophobic rhetoric and palpable hatred towards people of colour. Low hanging strange fruit even before the Civil War between the North and South. Still strange and lower hanging now.

KING LEER SAID HE’D MARCH WITH THE MOB. HE LIED AND FLED

He lied to the swilling, bloodthirsty mob that trashed the Capitol and said he’d march with them. He didn’t.

He crawled into the Trumpmobile and fled, leaving his F Troop to wage his filthy war of revenge in his absence; the headless monster he created now running amok.

The Terrorist-in-Chief watched the bloody coup d’etat attempt unfold on television safely ensconced in the White House, long turned into his own personal playpen.

Two days later, under threat of being removed from office before transition, he who so often betrays his country, betrayed the traitors he despatched.

Whilst the rise and fall of Trump is fairly scribbled on a Shakespearean canvas, his speech that day fell far short of Henry V’s famous speech made on the eve of St Crispin’s Day and the Battle of Agincourt.

What happens if Donald Trump gets beaten in November?

President Trump is confident of another win at the next election, but polls show it could be time for him to consider a career change.

LAST TIME THE CAPITOL WAS SACKED, THE BRITS DID IT

The last time the Capitol came under attack and set alight was by the British in 1814, in retaliation for burning the Canadian Capital at York, the year before.

But my thoughts are more drawn to what is known as the 1898 Wilmington race riots and murders. I cannot write of the Capitol siege without mention of this bloody, successful coup by white supremacists over an entire district.

Like the many massacres of Indigenous Australians, the atrocities of what took place at Wilmington, North Carolina, needs more public airing.

Pulitzer prize winner David Zucchino has documented the torrid episode in his powerful book, Wilmington’s Lie: The Murderous Coup of 1898 and the Rise of White Supremacy.

This time Democrat white supremacists are the “bad guys”. It’s important to hear Zucchini’s voice, since it echoes truths of our shared inhumanity.

He writes that Wilmington was:

America and the world have been subjected to years of Donald Trump’s poisonous calumny and racist venom, his weaponising of social media, the demonizing of “the other” and callous indifference towards people of colour, the poor, the homeless, the stateless, the marginalised, the losers he openly despises; those whose lives and spirit are riven by despair and desperation.

All the while Trump was grooming homegrown terrorists, he ignored millions of fellow Americans; those who no longer dare to dream, inwardly dying from a thirsting of hope; souls parched from isolation and the impact of the now feral pandemic of coronavirus, allowed to run rampant by a pathological narcissist, an Emperor Zero who would rather fiddle with a golf ball whilst his nation coughed up blood.

Trump remains more interested in his golf score than the COVID-19 death count.

He has been grooming and radicalising his followers in plain sight with his manic Twitter manifesto. Mien Trump. Stop the steal? It was Trump who stole America.

What to do about Trump’s crimes

Donald Trump’s time as President has seen its share of controversy and criminal activity, with mayhem ensuing through the transition process.

TRUMP: THE MAKING OF A PRECEDENT

Trump has stomped on Joe Biden’s parade. Sure. But he’s rubbished on his own legacy.

Now he is Onan the Vincible. Watching Trump in political in extremis, it is clear that if he is going down, Donald le Roi Soleil, is trying to take America down with him.

Trump the ugly American just got uglier. The rape he ordered on democracy attests to that.

Imagine if the Storming of the Capitol had been conducted by Muslim terrorists or Black Lives Matter activists instead of white supremacy terrorists?

‘TRUMPEACHMENT’: TRUMP’S SO BAD THEY DID IT TWICE!

Trump has left more than an orange stain on America’s history. He has the bloodstains of his own people on his hands.

The second Trumpeachment will hopefully bring some comfort to a grieving and riven nation. He’s so bad that Congress voted for it twice. Well earned.

The swamp was drained. We found Donald Trump at the bottom. He drained the swamp alright. He was at the bottom of it.

Had these invaders of capital been Muslim fanatics, this would have been a different war game. Are they terrorists, fundamentalist? Yes, arguably. Because they are white and describe themselves as “Christians” they get away with murder. At times, literally.

The police response to Trump’s praetorian guard was markedly different to that deployed at Black Lives Matter protest marches.